A wedding at Mas Piboule in Provence 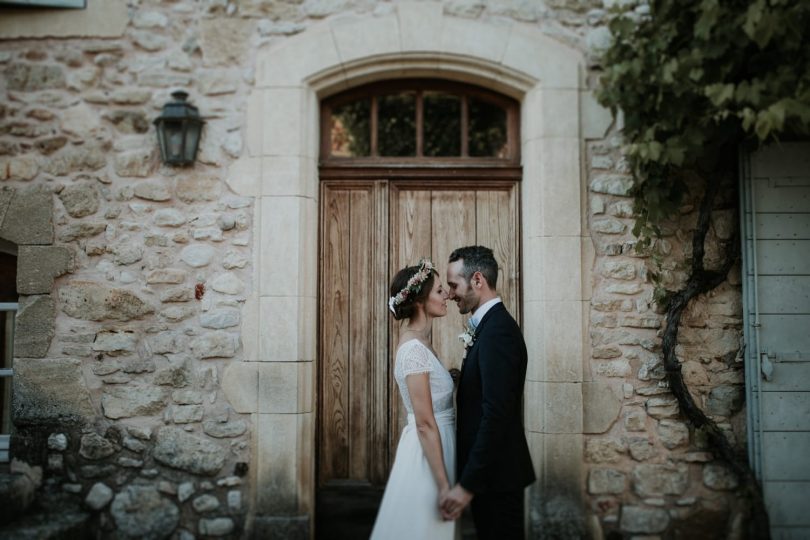 Carole and Fred have imagined a simple and romantic wedding at Mas Piboule in Provence. A day photographed by Soul Pics and immortalized to the video by Record you

Carole tells us their story … “We met a little over 8 years ago at a friend’s dinner. Fred was with a friend in common and just before his arrival, one of my friends jokingly said half that it might be done for me. I did not believe it for a second, and then finally, life gave me wrong and I actually met the man of my life that night.

The story does not end there, because 2-3 weeks after this dinner we had just met, we go back to a same dinner. And while we were talking to a friend, he told Fred that one day he would marry me. Fred then contradicts him and says that he would marry me one day. And now 8 years later I became his wife. “

“It’s been years since I told him I wanted to get married, it was important for me to do things traditionally, first marriage and then build our family. He was not very fan of the wedding and took a long time decide (a few years …).

Then during a weekend in London, our heart town, he knelt on his knees with the ring in his hands he had always said he wanted to offer me if he asked me one day in marriage. A solitary sublime of a beautiful French brand. I did not expect it at all because he had waited for the last moment of the weekend. Just before making our hotel room in the middle of the luggage that we were closing. I later learned that he wanted to apply to Hyde Park but having refused to go, he had to change his plans quickly. It did not change the fact that the emotion was there, we cried a lot of joy both.

For the anecdote, on the D-Day when we were watching our guests far away, he confessed to me that he was having the best day of his life and that this proposal was the best decision of his life. “

“Fred being very easy, he gave me carte blanche on everything except music and video. He himself in the audiovisual, we could not do anything about the video! Fortunately, we We found François (record you) whose videos were the only ones for which Fred could have stayed more than 30 seconds to watch them without comment, a feat!

Then for the rest, he trusted me and so I could do anything that I liked and it saved us the arguments that we had prepared. But I had a problem : I could not decide on a style, I wanted everything! ”

“The first step was to book the place and providers that I had spotted and for which I had no doubt. For the venue, I remember that I did not like anything and it is finally via a friend that we found the place of our dreams. A Provençal and family farmhouse surrounded by vineyards and lavender. This place was magical, completely private without constraint of imposed service providers and limitation of noise, it was not also part of the 1000 places seen. This place was unique and we were lucky that the owner agreed to rent it to us.

After months of Pinterest, blog and instagram, I finally decided on a rather romantic/chic theme. So I created everything myself, our logo, our atmosphere, our website, our stationery. It was important that everything looks like us. Then I gave Elodie the deco to help me because I knew that I was not going to manage everything until D-day.

Finally it was still a few constraints because the venue was not a place of reception, everything was going to take place outside and some of the guests were vegetarians including the groom.

Fortunately we had great service providers who knew how to deal with the place and our requirements. The caterer took up the challenge of creating a dish suitable for everyone without having two different dishes. “

“But even so, even though I have trouble delegating, luckily we were able to count on my mom and my parents-in-law to help us by visiting the premises and doing tastings. in our place because we live in Paris and they are there.

My dad, uncle and aunt who did some last-minute manual work. And of course our friends and my sister who were able to make us so happy by organizing things for us and who also participated in the installation of the decoration.

“We had cold sweats the previous days and this despite the heat of July. We had to receive a part of the decoration by chronopost and the driver never found the venue when finally he decided to leave everything at the post office on Friday noon without knowing that the post office closed until Monday. Fred and my mum embarked on a mad race to call the Mayor of the village to open the post.Luckily everything ended well, and we were able to install everything.

The day before, we had a little drink with the first guests on site, it allowed us to take advantage of them and start to lower the tension that began to rise.

“Then D-day everything was fluid although being very exigent, I do not think I was always easy even if my friends say no!

In any case, this day was beyond our expectations, everyone was very moved by the ceremony, it was a very strong moment, we did not expect it. Then the setting of the place, the light, the summer and jazzy atmosphere of the cocktail and finally the banquet dinner, made this day a timeless moment for everyone I think. “

“This day has been so emotional from start to finish that it’s hard to pick a specific moment.

It all began with an emotional ceremony, celebrated by our incredible Pastor Gary, where we saw all our guests shed a tear. Then the cocktail around the pool, rocked by the jazz sound of which my uncle, a talented jazzman, did us the honor to play with his friends, which did not fail to bring tears to my eyes.

A tip for the other couples

“Quickly book the providers you care about, for us, having the photographer, videographer and DJ we had spotted was a priority, we were very lucky to have them, but we did it a year and a half in advance.

For the rest, we can not say enough to surround you with the best people to help you and especially do not hesitate to brief several people on the same points to not forget anything.

Do not forget to say to your guests not to be shy, come to see you for 1 or 2 minutes, if only for a photo because some do not dare and you miss precious moments. It is unfortunately sometimes those who count the most.

And finally, do not hesitate to brunch the next day to continue the party. It was a beautiful moment for us, the time to enjoy those we had seen little the day before. For our brunch, everyone was dressed in white and we used the talented Amandine and her team for a 100% veggy buffet and Hadrien, our barista in chief who conquered everyone with his latte hit oat milk. We spent the afternoon in the pool on our giant buoys to have fun and enjoy each other. “