An engagement session in Scotland 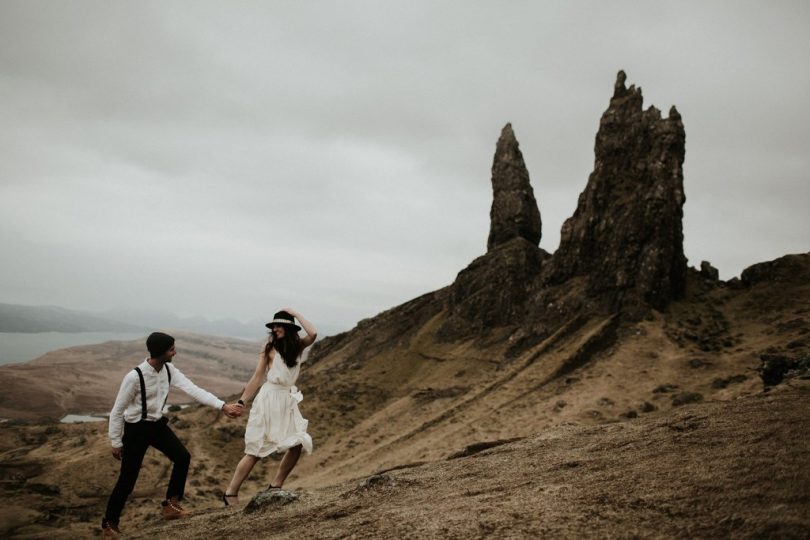 “We met thanks to our best friend in common, it was almost 6 years ago.” Alexandre was returning from a world tour in 2CV Camille was still a student in Nantes in dental surgery. Camille was on a New Year’s Eve party in Brittany and had a few trips to Paris to see family and friends, and from that evening they saw each other from time to time, for a pancake, an ice cream butte Montmartre, always laughing and bickering.

Camille was in search of the most beautiful love stories and dreamed of love at first sight as in the “romantic movies” she loves so much. Alexander, more rational, was asking the question to go further with this girl a little folledue.

“They learned to always discover each other a little more … And then, one day the case was finally concluded in one day in September 2012 (because Alexander not wanting” a summer history … wished to wait for the start of the school year !!!), in Germany where Alexandre had just moved, kissing after a fight of duffel (classic). From there began a relationship more or less complicated distance, full of twists, between Brest , Frankfurt, Paris and Nantes, which will last 5 years.

And then, while the long awaited moment of reunion approached in November 2017, one diagnosed a generalized lung cancer to Camille (what she will call her “Truc”). In the process, Alexandre finds himself unemployed. Life suddenly seems to be playing a very bad trick on them. But with the beginning of Camille’s treatment, which regains its energetic energy in just a few weeks, we find again the happiness and the joy of finally being reunited. Strolls hand in hand and game of petanque on the Berges de Seine between two trips to the hospital or an appointment with the oncologist … Our life finally two intensifies and our love comes out strengthened . ”

“Two months after the diagnosis, we go to the Dominican Republic without really knowing what the future would hold us. No matter, we had to enjoy all these moments of life and travel. Camille did not want to get married until she knew what she was going to be like with her damn truc, but the next control scanner was only in January, but a few hours back, on a beach in Punta Cana, she turned around and saw Alexander who was on his knees to make his proposal.

Alexander never ceased to believe in Camille’s strength to overcome his illness. And the excessive support and kindness of Alexander allow him to win every victory ! With each gesture, each look, a few tender and reassuring words and here it is again more beautiful. Alexander never doubted it, they will get there. They believe in it more than anything in the world. It has become a fight that they both live. Step by step. Day after day. Always stronger and stronger. ”

“A year ago, Aurélien Bretonnière, our photographer, had already asked us to do a photo shoot in Scotland, but unfortunately, at that time and given what we were going through, we could not break free … More recently, when we had to choose a wedding photographer, Camille (the most connected of the two) falls on Aurelien’s Instagram account.

After a quick Skype interview, we decided to offer him to photograph our wedding on September 1st, 2018. He accepted and took the opportunity to re-propose his project in Scotland. This time, impossible to refuse. Life is too short not to enjoy ! And here we are all three in these landscapes so magical and captivating of the Isle of Skye. This stay confirms our choice … Aurélien, both professionally and humanly convinced us and we are delighted with the photos! “