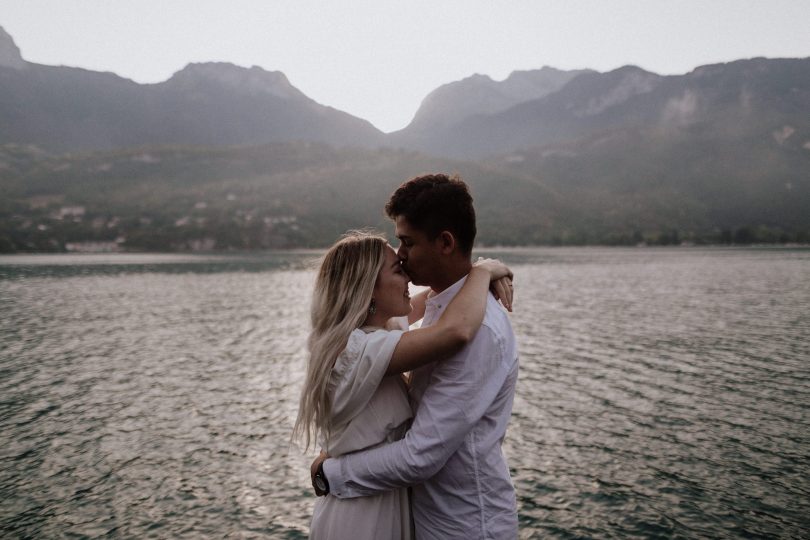 Today, meet Morgane and Jonas, two beautiful lovers who have chosen to share a privileged moment by the Annecy Lake and in its surrounding mountains, in front of the lens of Lika Banshoya…
Your meeting

We met at a dinner party at a friend’s house. During the evening, we immediately got along weel. It was the beginning of a great friendship punctuated by bickering, laughter and confidences. A great complicity was installed… And then… Impossible to leave each other ! We quickly developed deep feelings for each other. And there…. impossible not to get married…. Getting married was as obvious to us.

He: “I proposed in front of Lake Leman, to keep the total surprise, I have all maneuvered with the help of his brothers and sisters and my mother.We had to go to the cinema that night… Finally, she thought we were going to do that, but I had planned something else. Instead we took the car and drove 6 hours ! I proposed the next day facing the lake Leman, a beautiful landscape as she loved them, I had a flower wreath and the famous ring I was going to put on her finger It was a wonderful day because she said I DO without hesitation. “

She: “The surprise worked well, I really thought of making a cinema with our friends Finally the cinema was a bit off-beat … Jonas took me on a surprise weekend! To believe the GPS is towards Annecy I must admit that at first, I thought it was to celebrate the end of my studies … but it was much more than that.He made his marriage proposal the sweetest way the next day When I arrived in front of a breathtaking landscape, he put a wreath on my head, whispered a few words to me and knelt down, I was finally going to be his wife. to say that because even today I wear his name, I love him. “

We liked the photographic sensitivity of Lika: the effects of materials, the effects of colors, the shots… In her photos, we really felt that couples expressed all their love to the natural, with feeling and spontaneity. In short, his book was CANON!

This was our first photo shoot with a professional. As much to say to you that one apprehended, not being at ease with the frozen poses and looks! All our apprehensions are soaring when we made our engagement session with Lika. She managed the photo shoot while letting our love express itself naturally. At the same time discreet and committed. She knew how to be balanced so that we have the best memories. And until today, the commitment session is one of our most beautiful wedding memories.

We chose to do our engagement session near Annecy. That’s where we got engaged. This is a place we like very much, which is important to us. We feel so free in the face of such a creation. The panorama is just breathtaking! The mountains, the lake .. It was important for us to do it down. The idea really liked Lika too! She has without hesitation validated the project!