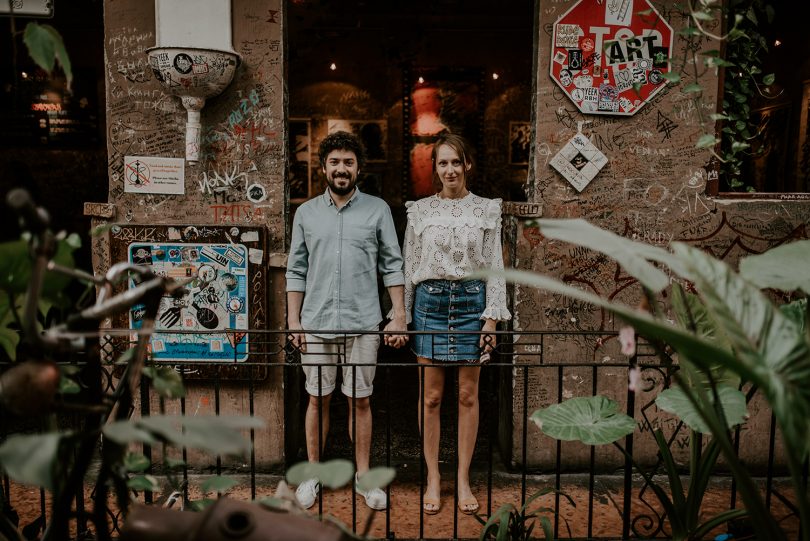 After a meeting on the Internet 7 years ago and many trips between France and Hungary, it is in Budapest, in the city where they met for the first time, that Guillaume and Marianna decided to share a moment to two in front of the lens of Laëticia aka Les Histoires d’A., in a place that is particularly close to their heart …

Marianna tells us a bit more about their meeting … “Our story is a modern fairy tale that nobody believed, simply because we met on the Internet seven years ago. Guillaume lived in Paris and me in Budapest. The first time we met in real life was on December 31, 2011, at 11 pm at Budapest airport.When Guillaume arrived, I was stuck in a taxi in the traffic jams of Eve… But finally, I joined him before midnight!

When Guillaume asked me to marry him, I wanted at least one part to take place in Hungary, because it’s my home and it’s my identity. And it also allowed our friends and the French part of the family to discover the city and my family. “

“Budapest has always been my city, my home, I started from the countryside to start my university studies and my life as a single adult.The first time Guillaume arrived in January, it was -17 degrees and he quickly understood the importance of the famous Hungarian public baths that Budapest has to offer!

Budapest is a city that has seduced the heart of Guillaume … The thermal baths, the old tramways, the Danube, the “ruin pubs”… We chose to make our engagement session in the most famous ruin pub of Budapest, Szimpla – and also in the 7th district which is next, because these places are important to us. Szimpla is “our place” in the heart of the ruins district. We come here every time we are in Budapest. We fell in love with its charm and, let’s face it, its quirkiness, its trinkets, its unpredictable decor, but also its people from around the world who come for a beer. “

“We were lucky to have Laetitia with us during all the trip. From our very first Skype call, we knew it was going to be a match between us and it made us feel comfortable, which is not so easy when you are photographed kissing you in the middle of a crowded bar! Her way of capturing our emotions so naturally and guiding us seemed so calm and enjoyable.”